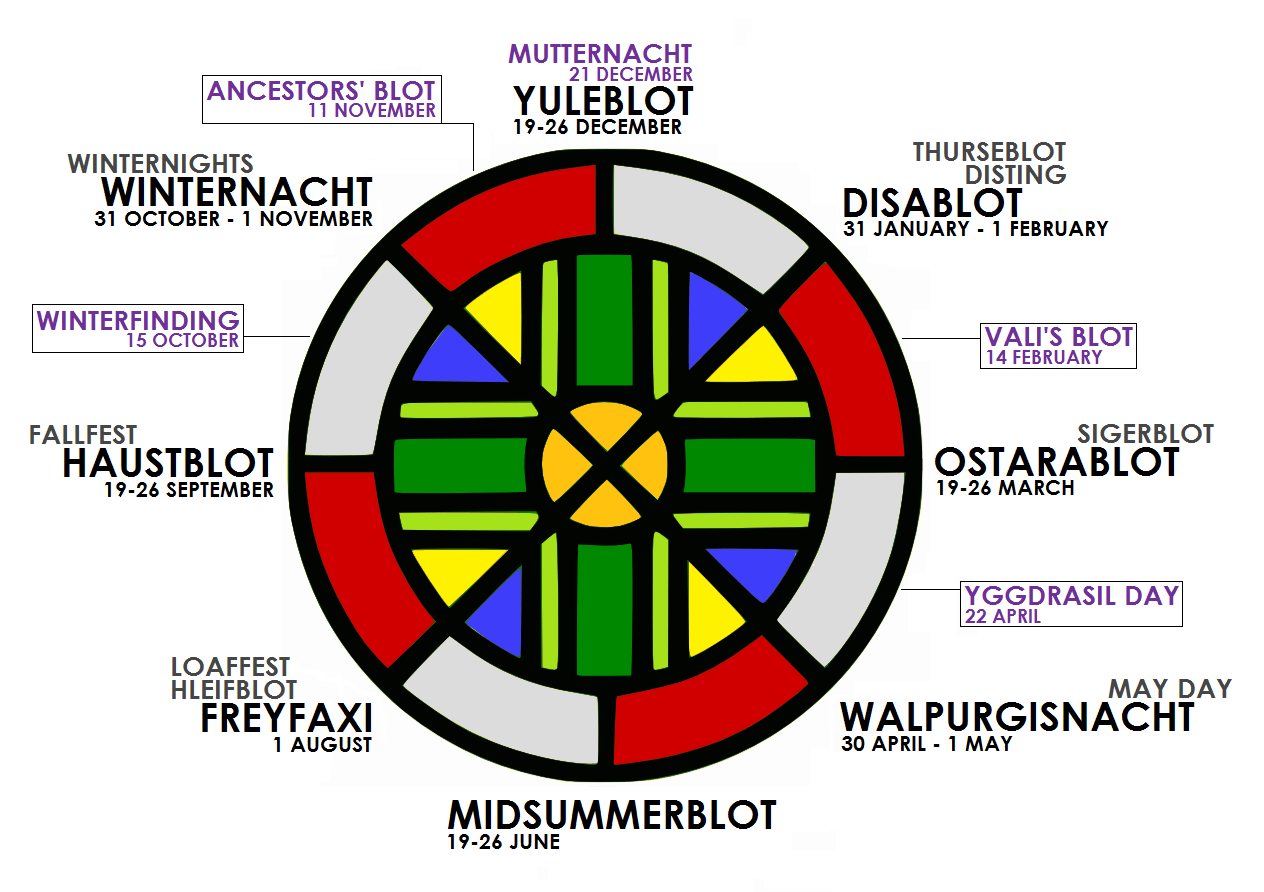 What About Pagan Holidays?

With the holiday season coming up fast (and let’s face it, no matter what time of year it actually is it always seems to be Christmas season in retail), it’s time to once again suffer through people yelling about the “War on Christmas”. Some people just want to complain, and this ridiculous concept lets them do so.

For the more introspective and curious out there, however, the “War on Christmas” may have inspired some questions. Namely, where did Christmas come from, and what holidays exist that aren’t Christian? Not just for the Christmas season, but all year around? It’s well known that Christmas has its roots in pagan holidays, specifically Saturnalia, and that many of the traditions are nothing more than either co-opted pagan traditions or simple folk traditions that have continued.

But what about other holidays? Not just holidays that the United States recognizes, but in general? What are the pagan holidays, and have any traditions from those holidays become folk traditions that have been wrapped up into more mainstream holidays and festivals?

Every culture throughout time has had their own seasonal holidays, and pagans are no different. Of course, since “pagan” is more of an umbrella term for non-major world religions than a religion in and of itself, there are a huge number of different holiday traditions to choose from!

However, modern pagans tend to follow what’s referred to as the “Wheel of the Year”. It’s a circle of seasonal holidays, and while it’s been solidified quite a bit from Wiccan practices, it’s a good reference since most spiritual beliefs throughout time had quite a bit to do with the changing of the seasons.

Yule, the holiday most non-pagans will likely have the most familiarity with, is the winter holiday. It more or less coincides with the Winter Solstice (the longest night of the year), though some people celebrate the Winter Solstice as its own holiday. Many of the folk traditions of Christmas are the same traditions practiced by pagans during Yule, such evergreen plants (mistletoe, pine trees, etc.), as well as gift giving and traditionally significant foods during feasts.[fsbProduct product_id=’769′ size=’300′ align=’right’]

Imbolc, the festival celebrating the first day of spring, is the next holiday in the Wheel of the Seasons. Many Imbolc practices have found their way into mainstream folk traditions, such as spring cleaning and stories and songs celebrating the finding of new love.
Following that is Ostara, or the Vernal Equinox. Have you ever wondered with the Easter holiday seems to be based on the solar calendar instead of a fixed date like so many other holidays? This is due to influences from the Jewish calendar (and their holiday, Passover), as well as pagan influences.

Beltane is the next major holiday, which is a holiday where you can clearly see multiple influences. Modern Wiccans tend to use practices following English and Germanic traditions, treating Beltane as a fertility holiday (as made popular by the NSFW song “First of May” by Jonathan Coultone). Many other pagans, however, follow Celtric traditions. These traditions celebrate Beltane as more of a time of new growth rather than fertility in specific. Imbolc involved fertility, Beltane involves rituals urging the strength and prosperity of the seeds that have begun to sprout, both literally and figuratively. There are also many rituals involving fire and the creation of a Beltane bonfire.

And of course, many modern pagans follow practices from both traditions.

Midsummer, sometimes called Litha, is the observation of the Summer Solstice. It’s recognized in many European countries as a festival day, though what it means spiritually to any individual pagan can greatly depend on the traditions that pagan follows.

Mabon, or the Autumn Equinox, is the middle harvest festival. Many of the traditions of autumn squashes and fruits have survived in modern Thanksgiving traditions.

And of course, Samhain is perhaps the most well known of the harvest festivals. It’s believed that the barrier between the world of the living and the world of the dead is the thinnest during this time. It’s the time when the living world finally begins to die, fading into longer and longer nights and the eventual frozen landscape that is winter. This is why it was often celebrated as a holiday to honor the dead. In spite of some modern thoughts, Halloween, or All Hallowed Eve, is not actually one of the pagan holidays. It was a holiday started by the Catholic church, incorporating many of the traditions of the three harvest festivals, in an attempt to pacify local villages as the Church grew and spread.

Ultimately, many pagan holiday traditions can be found throughout modern life and modern holidays. You just have to be willing to look!