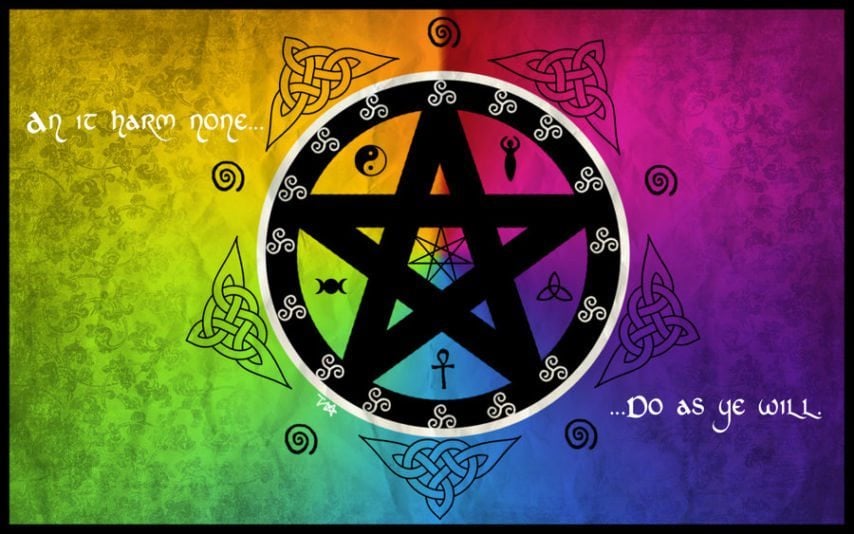 Exploring the Meaning Behind the Wiccan Rede

Just eight words make up the Wiccan Rede. Paraphrased, it states that as long as no harm is intended, Wiccan followers can “do what ye will” when casting spells and practicing this Pagan religion. The mother of modern witchcraft in the Cochranian tradition stated it as “Eight words the Wiccan Rede fulfill,” and if it harm none, do what you will. Rede is construed to mean counsel and guidance.

Wiccans of the modern era needed a simple phrase to summarize their traditions. As of now, no traces of evidence have emerged pointing to there ever having been an ancient source for the Rede. It is believed to have been created by Doreen Valiente, the most prominent witch in the 20th century, and the undisputed head of the Cochranian tradition of Wicca.
For all true Wiccans, there are no hard and set rules regarding its practice. Originally the rede was created in 1964 and was meant to help guide the central philosophy to Wiccans of all paths to help fuse the core of its practice into their souls and hearts.

The rede also helped guide Wiccans on focusing their spell casting so that it would either help others or help themselves but it would avoid harm in the form of evil spell-casting. The theory being that what is cast out most certainly returns to the spell caster or, as some Wiccans recite, “three times three it comes back to thee.” Valiente’s rede was eventually embraced by the Gardnerians and Alexandrians because of such sentiments.

The rede also reacted against the mantra set by the Ordo Templo Orientalis. This stated that doing what thou willed was “ the whole of the law.” Following Valiente’s lead, the other Wiccan paths joined together to put the focus on the freedom of the Wiccan and not on the effects of their magic. The switch was rather like going from strict conservatism to liberalism. This happened at a time when witchcraft was shifting from the colonial era into the modern era.

The rede also reflects issues which the Wiccans embrace with that liberal thinking. For instance, it embraces a polarity where men and women have equality. They also embrace all people who practice including having no objection to sexual orientation. Anyone who wishes to follow or practice Wicca is free to do so. Anyone who is homosexual, for instance, can fulfill any role in the community with absolutely no need to reference their sexuality.

One other tendency in Wicca is not to place control over others in the group. As in Catholicism where followers have to observe various dietary restrictions on certain days, the Wiccans do not set any such rules. If a person wishes to fast or stick to vegan foods on certain Sabbaths on the Wiccan calendar, they are free to choose if they do so or not. This will not change the status they have within the community whereas in Catholicism a failure to follow the rules is a failure to remain a Catholic.

The Wiccan way also encourages followers to be free and to be flexible. Should they wish to celebrate a particular sabbath prior to work or afterwards, that is their choice. Wiccans also do not think of themselves as chosen people and in that sense they do not go out of their way to convince others that they should join the Wiccan path.

Another difference with other religions is that Wiccan does not offer an afterlife that has benefits or punishments for behavior in the Earth life. Therefore, Wicca is a choice for anyone who finds it a good path for them in this life. They do not get to earn anything for the afterlife by being “good” witches. Instead, they understand that the afterlife offers all the concept of Avalon. This is a place in the afterlife where all are equal. Wiccans simply allow people to live their own ways here and now.

Still, the Wiccan Rede is not at all far from the Golden Rule which states one should do to others as they would have done to them. That rule however implies that an individual knows what is good for others rather than what the Wiccan Rede implies which is that individuals know what is best for themselves. They both do share the implication that it is always best to steer clear from outright acts of hatred.

The entire Wiccan tradition is at its core non-hierarchical. No path of Wiccan is supreme or better than any other. Those who come to Wicca are welcomed as equals and can take up significant roles in rituals if they choose. The skill which any individual possess is what they are capable of executing rituals with. There is no need to initiate oneself into a group but that again is up to the group or the individual.

Being initiated does not give any person special privileges. As such, many Wiccans feel happy dedicating themselves to the path. They would still be welcome in other groups and some groups are happy to do the initiation for them if they would like to have self-dedication done in a group setting.
Wicca also encourages the questioning of any concepts or thoughts. There is no absolute truth that all who follow must abide by. On the contrary, Wiccans are curious and question all that they can. They do have to get consent from their fellow Wiccans in their group where it is necessary but that is more of a show of respect for everyone’s equality.