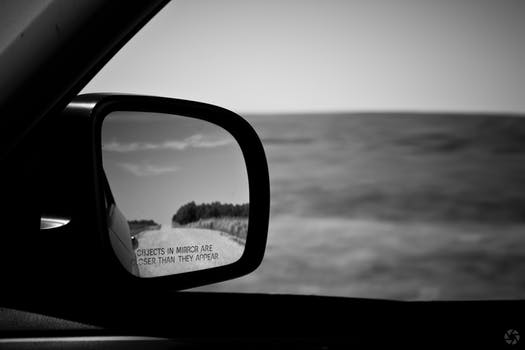 This is one new trick which I learnt from a Japanese ghost hunter.

Items you will need are two mirrors of same dimensions. Though size doesnt matter, but the bigger the mirror; the greater the visual outcome is.
You might also need two white candles and some incense.
Now, both of the mirrors should be placed opposite to each other.
Traditionally if situation permits, 1 mirror should be facing the northeast direction and the other facing the southwest.
This ritual should ideally be done at night or at dusk. For best results, you should also choose a real haunted place. Best if you also know the name of the spirits that haunt the place; the info can be obtained by performing a simple research.
Somehow, my friends think the last rooms along hotel corridors are constantly haunted.
When the mirrors are installed correctly, a player who wants to summon a ghost will put his/her left palm on the mirror facing southwest so that he/she is facing northeast.
Much like the Chinese, Japanese believe that northeast side is a member of a ghost door ().
The player should now continue to call out the name of the spirit after the candles are lit on either side indicating that both doors to spirit realms are now opened. It’s said that when the soul doors are opened, one should see spirits coming out from the northeastern door heading towards the southeastern door.
In our case, the mirrors act as doors to religious world. Theoretically, so long as both candles are burning, the player is pretty safe because the candle lights act as beacons for spirits to travel.
But if one of those candle lighting is extinguished; then spirits which came out from the ghost door cannot pass through the opposite side. If this situation occurs, then the player who stands in between the mirrors may be possessed by spirits and fainted or even becomes crazy.
Naturally, when everything goes smoothly, person between the mirrors shall see many white shadows or hearing sounds; he/she may feel something is massaging his or her shoulders as if people are walking hastily passing.
Spectators of this game may see reflections of inexplicable moving objects appearing on the mirror.
They may feel hot or cold or things in the place may topple or moved. If everyone stays calm, then no one shall be harmed.
In order to end the conjuration, the candle in the northeastern corner should be extinguished first to stop spirits from coming out.
As a precaution, some blessed salt should be ready and also as space purification things after the ritual.
As I heard, there are people became crazy and never recovered after playing this seemingly harmless game. So try with caution if you would, but best just to leave the ritual alone