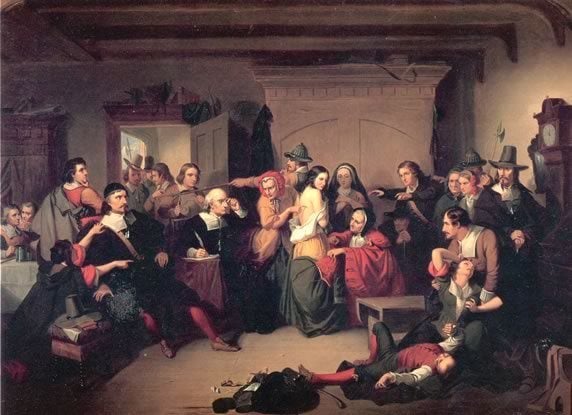 Blaise Pascal once said that men never do evil so cheerfully and completely as when they do it from religious conviction. This statement rings true particularly with the witch trials in Salem.

The 1692 Salem Witch Trials represent a dark period in American history. By the time all the idiocy had ended, over 200 people had stood accused of practicing witchcraft and 20 had been killed in the hysteria.

The witch trials in Salem have become synonymous with scapegoating and mass hysteria ever since the dark days ended. Read on to learn more details about the infamous Witch Trials in Salem.

What Were The Witch Trials?

The infamous Salem Witch Trials refers to a series of witchcraft cases that were presented before local magistrates in a settlement known as Salem, which in the 17 Century was a part of Massachusetts Bay colony.

What Led To The Trials?

It all started in January 1692 when a group of young girls that later came to be referred to as the afflicted girls became sick and started behaving strangely after playing a fortune-telling game. The 9 afflicted girls all experienced similar symptoms including experiencing fever, contorting in pain, hiding under furniture, and suffering ‘fits’.

A doctor was called in February to check on the girls but found nothing wrong with them physically and offered the suggestion that they may be bewitched. Soon after, 2 of the girls named three women they believed had bewitched them. The women were Sarah Osburn, Sarah Good, and Tituba who was a slave working for a pastor.

All three women were easy targets for the accusation of witchcraft since they were social outcasts. It would not be hard for Salem residents to actually believe that they were engaging in witchcraft.[fsbProduct asin=’0521661668′ size=’300′ align=’right’]

The 3 women were arrested and examined in March. While Tituba was being examined, she made the shocking admission that Satan had approached her along with Sarah Osburn and Sarah Good and they all accepted to be witches and do his bidding.

The confession by Tituba was the trigger that started the hunt for more witches and mass hysteria in Salem. It also served to silence any opposition to the notion that Satan had invaded Salem.

Four more women were later accused and arrested in March. More women were accused in April along with several men. In May, as the number of cases kept growing, the Governor set up a special court to hear the cases.

While the witch hunt began in Salem, it spread quickly to neighboring towns including Gloucester, Ipswich, Topsfield, Salisbury, Andover, and Amesbury. Many residents of these towns were brought to Salem to face trial.

In June, the number of accusations and arrests started declining but still continued with the local jails holding over 200 people accused of witchcraft.

Overcrowding soon started becoming a growing problem in the jails and those accused of practicing witchcraft were held in several jails in Boston, Ipswich, and Salem.

The accused were regarded as dangerous and were held in the dungeon chained to the wall since the jail officials believed that it would ensure that their spirits could not flee jail and torment their victims.

The Salem Village meetinghouse served as a venue for the pre-trial examinations. There, accused persons were questioned in front of a jury by a judge and it was the duty of the jury to determine whether accused person were to be indicted on witchcraft charges. If the accused person was indicted, he or she was not allowed a lawyer and had to enter a plea without guidance of legal counsel.

Early Opposition To The Trials

One interesting thing about the trials is that not all people in Salem either supported the trials or believed in witchcraft. The witch hunt had many critics. However, critics of the trials were subsequently accused of practicing witchcraft themselves. The assumption was that anyone that defended the accused or denied the existence of witches must also be one of them and needed to be put on trial.

The Cases Go To Trial

The Salem courthouse was the venue for the trials with a woman known as Bridget Bishop being the first to be put on trial. Bishop had been accused of practicing witchcraft years previously but had been cleared of the crime. Five of the afflicted girls were the ones that accused her by stating that she had hurt them physically and attempted to make them sign a pact with the Devil. Bridget however kept defending herself repeatedly during the trial by stating that she was innocent and she knew nothing about witchcraft.

At the end of her trial, Bridget was convicted and sentenced to death. On 10th June 1692, she was hanged and became the first victim of the Salem Witch Trials.

In July, five more people were hanged including Rebecca Nurse. The execution of Rebecca became a pivotal moment in the trials. While most of the other women accused of practicing witchcraft were unpopular social outcasts, she was a well-loved and well-respected member of the community.

In fact, her initial verdict was not guilty but the afflicted girls began having fits in the courtroom as soon as the verdict was delivered. The judge then asked the jury to reconsider its verdict. One week later, the jury changed its verdict to guilty.

Rebecca was executed on July 19th and it was then that Salem residents started questioning the validity of the trials.

Another crucial moment in the trials was the public and torture of Giles Corey. Giles had been accused of practicing witchcraft in April while his wife was being examined. With the understanding that conviction would mean confiscation of his large estate meaning that it would not be passed down to his children, he refused to enter a plea and brought his trial to a halt.

At that time, English law dictated that anybody that refused to enter a plea could be tortured in an attempt to force them to enter a plea. The torture involved laying the prisoner on the ground while naked then placing a board on top of him. Heavy stones were subsequently loaded onto the board with the weight being increased gradually until either the person died or he entered a plea.

Giles was tortured in this manner in mid-September for 3 days until he died on September 19th. His cruel and gruesome death strengthened the growing opposition to the trials.

The trials and executions continued until the colonists started wondering whether so many people could actually be guilty of the crime of witchcraft. They started fearing that far too many innocent people were being executed. Some of the local clergymen started speaking out against the witch hunt and attempted to persuade the officials to cease the trials.

The End Of The Salem Witch Trials

The end of September was when the use of spectral evidence was declared inadmissible and marked the beginning of the end of the trials.

While spectral evidence, which is that based on visions and dreams, was not the only evidenced used during the witch trials, it was the commonest and the easiest for accusers to fake.

Other types of evidence used in the trials included possession of particular items such as books on the occult, ointment, confessions of the accused, and the presence of a supposed ‘witch’s teat,’ which was a strange blemish or mole on the body of the accused.

8 people were hanged on September 22 and they were the last hangings associated with the now infamous witch trials.

On October 29, the special court for handling the witch trials was dismissed and the 52 people that were still in jail were tried in a different court the following winter. Now that spectral evidence was no longer allowed, most of the remaining prisoners were either released or found not guilty because of a lack of real evidence. The people that had been found guilty were also pardoned by the governor who also did the same for the last few remaining prisoners the following May.

The Victims Of The Trials

In total, 19 victims were hanged during the trials. Others were either found not guilty, found guilty but pardoned, escaped from jail, evaded arrest, or were never indicted.

Life After The Trials

In the chaos that ensued during the trials, business matters, daily chores and other activities were all neglected causing multiple problems for the colony for years to come. The entire colony suffered. People were so focused on hunting and destroying witches that they neglected all else. They forgot all about caring for the infrastructure and never planted or cultivated. In the end, food became scarce and taxes became higher. Salem started decaying slowly.

The colonists started feeling remorseful and ashamed as the years passed on because of what had transpired during the Trials. Once the trials had ended, the colony started suffering numerous misfortunes such as crop failures, droughts, Native-American attacks, smallpox outbreak that many people started wondering whether God was punishing them for what they had done.

In December of 1697, the Governor issued a proclamation hoping to make amends with God. In January, a day of prayer and fasting was held known as the Day of Official Humiliation.

One of the afflicted girls issued an apology in 1706 for her role in the trials particularly in the case against her neighbor Rebecca Nurse. She was known as Ann Putnam, Jr.

In 1711, the colony passed a bill that restored some of the names of the people convicted of witchcraft and paid £600 in form of restitution to heirs. Not all the victims were named because some of the families of victims did not wish for their family members to be listed. Some of the surviving victims were suing some of the law enforcement officials involved in the trials but the bill protected them.

In the year 1957, Massachusetts State issued an official apology for the trials and cleared the names of some of the remaining victims that had not been listed in the 1711 law.

In November 1991, the town officials in Salem announced plans for a Witch Trials Memorial in Salem. During the announcement ceremony, Arthur Miller, a playwright made a speech and read from the last act of The Crucible, his 1953 play that was inspired by the witch trials.

In October 2001, the State amended the apology issued in 1957 and cleared the names of the remaining unnamed victims.

Primary Sources Of The Witch Trials

Everything known about the infamous trials comes from just a handful of primary sources. These sources include official court documentation along with books that the ministers involved in the trials wrote. Had these ministers never written these books or helped in recording the proceedings, it is quite possible that nobody would know half of what is now known about the trials.

The common myth surrounding the witch trials is that victims were actually burned at the stake. The truth of the matter is that no witches or people accused of witchcraft were ever burned at the stake in Salem. At the time, Salem was still ruled by English law and it only allowed for death by burning for use against those men that committed high treason and only after being hanged, quartered, and drawn.

The Salem Witch Trials represent an unforgettable period of American history. It is a period when people turned their religious conviction to a tool for murdering and oppressing others. It is a history that will probably never be forgotten but should definitely never be repeated.