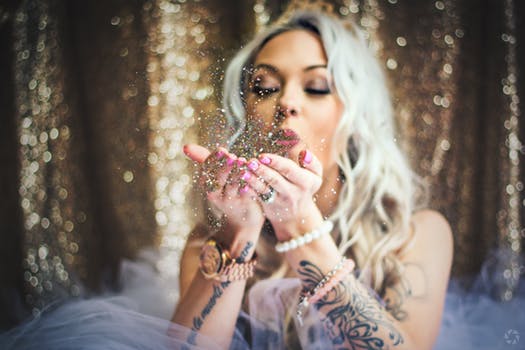 This is an info page on what glamour is.

While good for many things, glamour magics strongest application is illusion (those of the House of Eiluned are proficient at this purview). Illusions are different for the fae than they are for deadly creatures. Elsewhere is largely composed of a substance known, colloquially, as glamour. Glamour is an ethereal, mercurial thing, similar to dreams. For, in fact, it’s similar to dreamstuff. A thing. While richest and most potent in Elsewhere, glamour is found in any place there are things that dream and sleep and feel and bleed. Illusion magic takes glamour and shapes it, bending it to the will of the caster to create an image, odor, or other tactile sensation.
Unlike mortal illusions, glamour illusions are visible to anybody that looks. As if they were real. Always, however, there’s a single thing that gives away the lie of their presence. A complete apple may taste like a pear, a man may be dressed finery except the insides of his pockets may betray the rags he wears… etc.. And if you do not know the illusion to be untrue? It can still cause you harm. The key in avoiding injury or even death by illusion is the knowledge that it is, in actuality, merely an illusion.
Simple illusions (e.g. the sound of music, images of items that are clearly naught but images) take very little time to make. A flick of the fingers and little more. Anything more complicated requires concentration. The physical scope of this illusion is irrelevant, the details are what is more the point. A strawberry, entirely edible, perfectly comprehensive save for one silver seed could take as long as a raging wildfire that spans miles.
The more a fae spends on crafting the illusion, the smaller the inform (the thing that reveals it to be an illusion). Some fae are known to spend months or years creating illusions. Some grand, some insignificant (an immortal monster has little use for time, after all), but all such illusions are lovely and detailed.
Another aspect about illusions is that they may be bound to an object and, when finished, be triggered by a particular event or word. Then the illusion will be unleashed. The illusion must then run its course or the item it is stored in must be destroyed in order to cease it. If not bound into an item, the illusion might only be stopped by the one weaving it, or by rendering the one weaving it unconscious or dead.