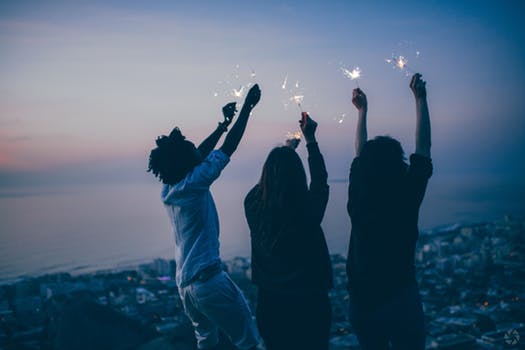 This spell requires the caster to have an understanding of using intent and directing large amounts of energy.

6 candles: A white candle especially for yourself, along with five other candles that may be black, or another variety of colours, so long as the intent is there. Chalk blended with black salt. Wear items that symbolise your belief and religion, along with preferable ritualistic wear.

Draw a five pointed pentacle (star in a circle), and draw a circle in the middle of it using the chalk and black salt, though regular salt works just as good. The best idea would be to grind the chalk and mix it with black salt and scatter it, even though it needs to remain perfectly visible.
Place five of the candles at each stage of the pentacle, and say a prayer or something wrapped with intent with regard to your protection, and that it also attracts the night and its beings. Before you place your final of the five candles, ensure that youre inside the pentacle, and then restart.

Stand in the smaller circle inside the pentacle, and light your white candle, and say a prayer or something similar. Your goal should include your final protection and why you are doing this curse, together with making that smaller circle your complete safe haven. Absolutely nothing can get you there. Fix that thought inside you, and nurture it.
In an audible tone, begin to incite your own circle. Go to every candle, starting with the north candle, and pray over them or something similar and light them. Direct your intent to making the flames of your candles beacons to the terrors of the night, together with ensuring they protect your circle.
Returning to your smaller circle, say another quick prayer or something like your defense and intent, which should be along the lines that you want this to influence, why, who you are, and those kinds of things.

Speak to the night and it may listen. When done, maintain your white candle level with your chest and meditate with your eyes shut. Think of the most terrifying things imaginable in that dwell in the night; the boogeymen that kept you petrified in bed, the demons in the closet, and bloody well else it’s possible to sum up. Consciously beware of your flow of energy and connect it with that of the entire moon and the casting hour. Wrap your intent, cursing somebody and ensuring your protection during the entirety of it, with the energy that you connected, and let that empower you. Try to be more conscious of things around you, and if you sense theres a lot of activity, something which you cant see, going on outside of the pentacle, its time to begin.

Make yourself audibly known while in your meditative trance, and speak of your intent. Speak of who the person is, what they look like, and every other piece of information about them that you can consider. Again, state your reasons why, who you are, why youre asking them (frankly they can be horribly terrifying if they completely reveal themselves), etc. Try to sense if the atmosphere has changed and if they find your intent agreeable. If so, and try to be as certain as can be before carrying on, ask them specifically if they could help carry out your will.

Youre able to specify certain circumstances to the victim, though it doesnt hurt to allow the night have its own way. When you finish, stare directly into the evening and try to bring a sense of immense calm and obvious willpower on your own and wait. This can take anywhere from two minutes to up to four hours. The source I initially attained this from mentioned to me that this specific portion of the ritual has taken up until daybreak and that he had heard that if you dont break the ritual, you’ll be admired for your patience. Im not sure what to make of this. Youll feel something virtually shift and youll know that it wont be long until the victim will be having terrors and frights.
Say a prayer or something like your protection, and make it known that you are shutting the pentacle and carrying on. Blow out five of those candles, and leave the area with your white candle still in hand. Blow it out when you have left the area completely and go home.

Buckland's Complete Book of Witchcraft...
$15.59
Add to Cart
Scroll back to top
Shares